This article was collaboratively written by Milani Buddhika, Nusra Afzal and Hasitha Adhikariarachchi.

Long time ago in my school days, I had taken part in the western band and the drama crew, but never sports! On the contrary, my three classmates Milani, Nusra and Chandima had too much blood pumping in their veins and had joined the school cricket team. Guess what, they played leather ball!

These three girls were always on the ground, whenever they came back to classroom, they were sun burnt! They were dedicated, disciplined and fun. And they were among the very first school girls to play in a big match in Sri Lanka.

The first Inter School Big Match was held at Kegalle Public ground on 5th of November 1999, between St. Joseph’s Balika Maha Vidyalaya Vs Kegalu Balika Maha Vidyalaya. The former Sri Lankan Cricket Captain, Mr. Arjuna Ranathunga was the chief guest, and my friends brought back a stump autographed by Arjuna. In 1999 and 2000, the matches were drawn.

My classmate Milani, walked down the memory lane with me;

“Honestly, playing cricket for my school (St. Joseph’s Balika Maha Vidyalaya) is the best thing I’ve ever done in my life. I gained so many things thanks to that. We have played seven big matches”.

My other classmate who played cricket, Nusra also shared her memories;

“We should thank Mrs. R.M.C.K Athapattu (our former principal of St. Joseph’s B.M.V) and Mrs. R.Malawana (former principal of Kegalu Balika M.V.) for starting such an event. At the same time, we thank everyone who helped us to grow and build ourselves and identify our talents, so a special thank you goes to our coaches and teaches in charge. We cherish the students of both the schools for being present at the match with us, and encouraging us by cheering up.”

“Do you know why it didn’t continue after 2006?” I asked some other girls of my school who had played the game.

I remember cheering for my friends in the ground, “Come on Milani! Come on Nusra!”. My classmates and I would scream till the end of the match, and the next day our voices were strained. And we would gather around Milani, Nusra and Chandima to tell how much we adored their talent!

We were tomboys, energetic and carefree but dedicated for what we believed in. I believed in the pleasure of arts, and cricket was the religion for Milani and Nusra. When we look back after all these days, none of us have anything to complain about those moments. We just hope that the two leading girls-schools in Kegalle will make plans to have the big match again! 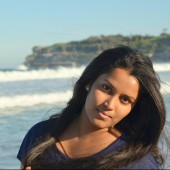 Hasitha is the winner of Multilingual Poetry Slam, NSW, Australia (2017). She fell in love with this profession when she was a little girl who loved writing her heart out. She represented Sri Lanka at the South Asian Film Arts and Literature Festival (SAFAL Fest) in Sydney. She started Queen of Sea in 2013 and now she shares its’ space for publishing write-ups with her friends who love writing as much as she does.

Girls from the Middle East